With approximately 270,000 inhabitants and 48,000 students, Münster is the largest city in the Münsterland. The Münsterland is a rural region in the western part of Germany, famous for its castles and its distinguished history. As an academic and cultural city, Münster offers a wide variety of museums, theatres and events (which currently do not really happen, so this list is empty). The unique historic city centre, Lake Aa and the many parks and tree-lined avenues have made Münster a popular destination. Münster’s Aaseepark was awarded the title of "Europe’s Most Beautiful Park 2008".

Moreover, houses, churches and squares in the restored old town tell tales from different centuries but, at the same time, audacious modern architecture is artfully integrated within the city. Münster’s port has developed from a goods transshipment centre to a creative quay with cultural highlights like the port festival. Furthermore, Münster is also well known for its numerous traditional and modern gastronomic delights as well as its exciting nightlife.

It was no surprise that Münster was awarded the title of "Most Liveable City in the World" by the United Nations Environment Programme in 2004.

In 793 Charlemagne sent out the Frisian Liudger as a missionary to convert the Saxons. On the right bank of the Aa Liudger built his church and cloister, the monastery ("monasterium") from which Münster derives its name. In the Middle Ages, Münster became a leading member of the Hanseatic League. The Baptists founded their empire in Münster, which ultimately turned into a reign of terror and perished in 1535. 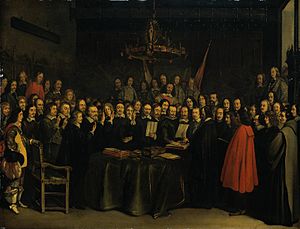 The signing of the Peace of Westphalia in 1648 in Münster and Osnabrück ended the Thirty Years’ War and Eighty Years’ War and was one of the foundations upon which modern Europe was built. The peace treaties resulted from a large diplomatic congress, thereby initiating a new system in central Europe. The treaties’ regulations became integral to the constitutional law of the Holy Roman Empire.

Münster is likewise famous for its renowned personalities. The Bishop of Münster in the 1940s, Cardinal Clemens August Graf von Galen, for instance, was one of the most prominent critics of the Nazi government. In retaliation, Münster was heavily garrisoned during the Second World War. After the bomb terror of the World War, the citizens of Münster rebuilt almost to the finest detail their historical old town.

There are countless sights in Münster, some of the most famous being:

More information about living in Münster.